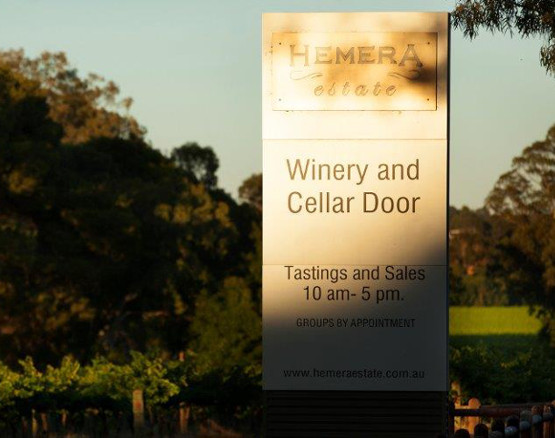 WELCOME TO OUR PLACE

Nestled just outside of Lyndoch in the beautiful Barossa Valley, Hemera Estate rests on a 100-year-old vine-bearing acreage.

The property was purchased by Pauline and Darius Ross in 1993, and the first vintage produced in 1999 under the name of Ross Estate. The winery was built in 2000, and in 2012 was purchased by Winston Wines and the name changed to Hemera Estate.

We pride ourselves on producing premium wines, with over 95% of our vintage produced from the grapes you see on our property.

We are delighted to welcome you to our home and share the warmth and character of our beautiful estate with you, along with the best one-on-one attention from our wonderful cellar door staff. Take a slice of our place home with you – we look forward to seeing you at our cellar door.

Hemera is the name of the Greek goddess of daylight.  This name was chosen because the unique position of our site and vineyard means we get the first morning light in the area.

In practical terms this means our vines actually get more sunlight than average in the cooler part of the day and as such we are able to harvest our fruit earlier than average thus retaining a natural freshness and elegance in the final wine.

We are very much an estate style winery. Our winery and cellar door sit surrounded by our 45 hectares of beautiful rolling vineyards. The vines feel like they are our backyard, particularly at harvest when the fruit is picked and carefully driven down the bumpy track to the winery.

Our team is always on site so when they’re not in the vineyard or winery they will likely be seen chatting with customers and visitors in cellar door or at the fruit receival area during harvest. We pride ourselves on making wine that is elegant, shows great purity of fruit and has great character. We believe the best expressions of the Barossa Valley are wines that are rich in fruit and complexity but retain a driving sense of refreshment.

The Hemera Estate vineyards are in a unique position. Situated above Lyndoch in the Southern end of the Barossa Valley they already benefit from the slightly cooler, wetter conditions that prevail at this end of the Valley. Added to this is the undulating nature of the site with altitudes ranging from 200-250m above sea level and different aspects on offer across the vineyard blocks.

Our white blocks are planted facing South to benefit from the cooling Southerly gully breezes whilst the majority of of our red blocks are tilted North East to get the morning sun. We have varied soils across the vineyard ranging from deep clay loam for the Cabernet Franc to sandy loam across our Block 6 Shiraz and shallow rocky ironstone clay loam over limestone for our fabelled Block 3A Shiraz.

Meet the people who bring Hemera Estate to life

Like many in the wine business Alex came to wine from another industry; he was enjoying a marketing career in Sydney when the wine bug bit and an overriding passion led to a change in his long term plans. Moving himself and his family to Adelaide to study the Graduate Diploma in Oenology he immersed himself in the wine industry.

After graduating, there were winemaking adventures in the Rhone Valley, Burgundy, the Barossa Valley and New Zealand before returning to South Australia in a contract winemaking role creating wine for a range of clients from regions as diverse as Coonawarra, Clare Valley and the Limestone Coast. Alex’s love for the Barossa Valley saw him return in 2011 where he spent 3 years at Schild Estate making internationally recognised, multi award-winning wines and exploring his passion for the vineyards of the Barossa and in particular the finesse, elegance and fruit purity of the Southern end of the Barossa Valley. The chance to continue that with the stunning vineyards of Hemera Estate was an opportunity not to be missed.

Alex’s winemaking philosophy is to strive to deliver wines that are true expressions of the land from where they come and that offer complexity, finesse and refreshment for the drinker. He likes to keep things simple in the cellar saying “I see the role of the winemaker as that of a carer for the wine. Similar to a parent or teacher, you can’t tell the wine what it is going to be, you have to nurture and take care of it so that it can express itself to the fullest”.

For Alex the vineyard is the source and driver of the wine style, getting to know the soil and the vines on each block ensures the right decisions can be made at harvest to provide the best building blocks for the final wine. Then the blending can begin: “Selecting wine from different blocks in the vineyard and different barrels to create something that is so much more than the sum of its parts is the real joy in the process. If successful, a great wine is born, one that is thought provoking, complex, balanced and always draws you back for more”. 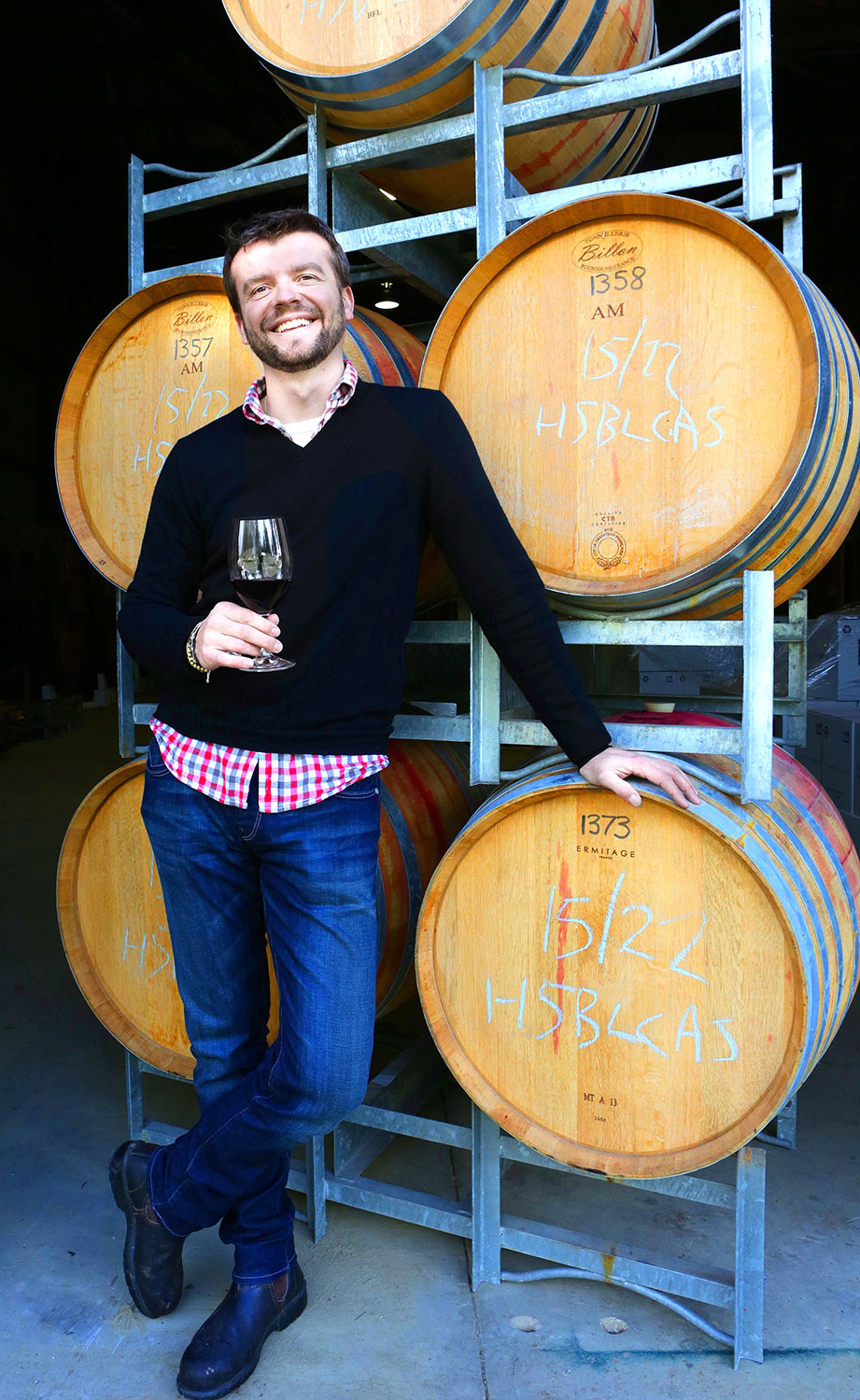 Jason Barrette has a long-held and palpable passion for wine. Whilst his career began with 13 years in the Australian Army, it was a tour visiting the famous battlefields of Europe that propelled Jason’s foray into wine.

Visiting the wine regions of France and Italy, Jason was enamoured, immersing himself in the European wine culture. This was all he needed to make the decision to retire from the military and pursue his dream to become a winemaker. Jason returned to Australia to study winemaking at  Adelaide University and completed a Bachelor of Agriculture (Oenology) degree in 2005.

Upon completing his studies Jason joined the Penfolds winemaking team at Magill Estate, working closely with Chief Winemaker Peter Gago to craft many of Penfolds premium wines including Bin707 and Grange over the last twelve years as Penfolds Magill Estate Winemaker.

Outside of the Australian vintage, Jason increased his winemaking knowledge by travelling to the Northern Hemisphere, completing dual harvests as a “Flying Winemaker” for over a decade, consulting in Portugal, France, USA and Canada, Jason has made all forms of wine style, from, Red, White, Sparkling and Rosé through to Fortifieds and Ice-wine.

Over the years, Jason has been able to bring back to Australia many different skills and winemaking techniques and knowledge of grape varieties and wine styles from some of the best winemaking regions and wine houses in the world.

Having worked with premium Barossa fruit for over a decade, it was hardly surprising that his wine voyage has ended being based in the Barossa Valley at Hemera Estate. Jason is excited to work closely with the Hemera viticultural team, learning the idiosyncrasies and intricacies of the vines and their microclimate to unlock the real potential of the estate vineyard. To be able to maximize expression of a grape variety and the terrior form the framework for the oenological decisions that Jason makes. Jason has found out first hand in the first weeks of the 2017 harvest how unique the Southern Barossa is in regards to climate. A very rare climatic phenomenon “anvil cloud” formed literally over the top of the vineyard and winery dumping 20mm of rain in 10 minutes. Other where in the region it remained dry.

Jason’s hands-on approach is a testament to the wines that he creates. He is more at home at the bottom of a fermenter (bogging out), than behind a desk. His attention to detail is reflected in the quality of the wines that he produces.

For Jason, winemaking doesn’t simply finish when the wine is tucked away in barrel for maturation. He believes, and has seen “many a wine where immense time and effort in the vineyard and during vintage come to a disappointing conclusion when it comes time to blend and bottle though oxidation, bacterial spoilage”. Jason believes that barrel maturation times should not be set in stone for particular wines. “Each vintage is different and capturing fruit intensity, varietal expression and finesse in wines is critical”.

This rings through with Hemera Estate’s mantra: perfect balance between intensity, structure and elegance. 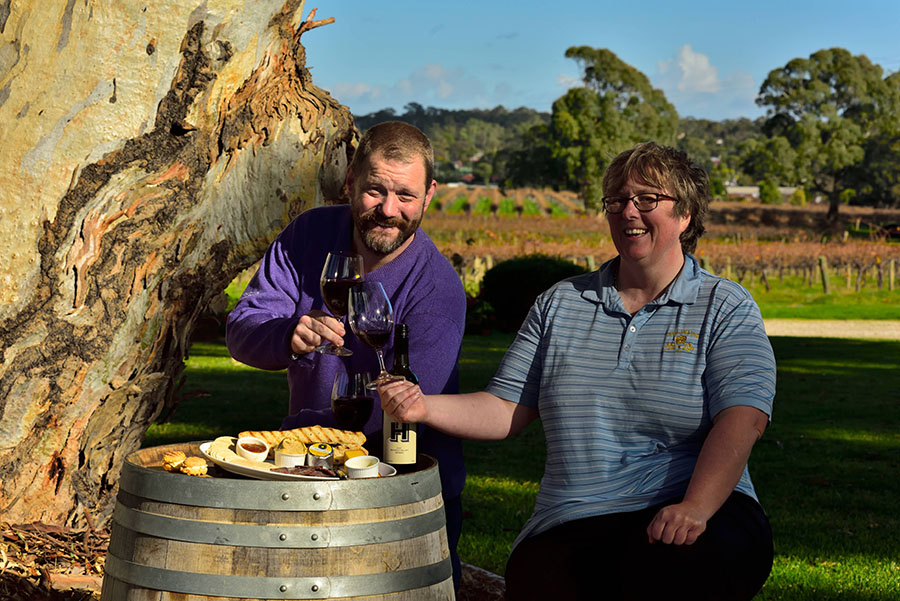 Heath completed an Honours degree in Mathematical and Computer Sciences at the University of Adelaide in 1995, majoring in Pure and Applied Mathematics and Computational Physics before going on to postgraduate studies in Mathematical Physics and teaching as part of the Physics Department. He was an inaugural Graduate Member of the Australasian Society for General Relativity and Gravitation. He later came to his senses and left his PhD studies to do his first vintage as a wine chemist under Nick Walker at Krondorf Wines in 1997, reasoning that whether or not black hole thermodynamics was worth the time and effort, red wine definitely was.

He subsequently went back into teaching at Trinity College, first on the South School and then as a Head of House and Mathematics and Physics specialist at the Senior School. In 17 years as a full-time teacher and three years as a relief teacher he primarily taught Mathematics, Physics, Chemistry, Biology and Research Project, but also managed to cross disciplines into every other subject at the College at some point during his relief teaching.

He has also worked at Langmeil Winery under Paul Lindner as a wine chemist and cellar hand and now manages the cellar at Hemera Estate, takes care of all the ferment, barrel, finished wine and chemical operations, repair and maintenance (and the odd painting, plastering or building project), occasionally gets to drive a tractor and has prolonged arguments with the computer network and database system. When he isn’t busy doing that, he can usually be found restacking pallets of wine cartons or pouring tasting samples in the cellar door.

In his spare time, he plays in the B Men’s Barossa Hockey League (badly), plays in his shed practising his blacksmithing (reasonably well), and turns out to responses for the One Tree Hill CFS Brigade.

After studying Hotel Management in NZ, Rachael decided the wine industry was her calling and in 1995 moved to South Australia to study wine marketing at Roseworthy Agricultural collage (Part of University of Adelaide).

Upon completion Rachael moved to Sydney where she worked for Cellarmasters for 8 years before chasing the surf and sun in Queensland working for Sirromet Wines.

However the call of the Barossa beckoned again and Rachael moved back to work at Rockford wines before back issues forced Rachael to stop work and concentrate on her back.

Returning to work part time Rachael was employed at both Travis Earth wines and Torbreck Vintners.

In 2016 it was time to work full times again and opportunity arose at Hemera Estate as Cellar Door Manager.

Being a small winery there is a lot of diversity in Rachael’s role, from cooking up a storm for PR, to serving wine to customers, to managing staff and talking to customers both in person and on the phone, Rachael enjoys her role and the staff and customers around her.

If you can’t find Rachael in Cellar Door she is either on the golf course on in the kitchen or at some restaurant eating. Yes the days of surfing are in the past.

Our cellar door is open daily from 10am to 5pm. Come and spend some time with us and enjoy a winery tour (by bookings only, not available every day)
and an informative tasting of our premium wine range. 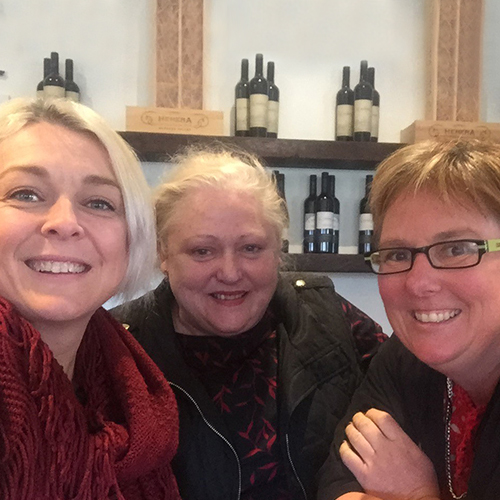 Our team pride themselves on ensuring every customers experience with us is informative and memorable. Our extensive range of wines means we have something for just about everyone’s palate.

Under the Liquor Control Reform Act 1998, it is an offence to supply alcohol to a person under the age of 18 years. We require proof of age for all wine orders being delivered and served.
Wine can only be delivered to the adult purchaser being 18+ and in accordance with the instructions of the purchaser. Producers Licence #57602625
Copyright Hemera Estate | All Rights Reserved. Another Stellar Performance...